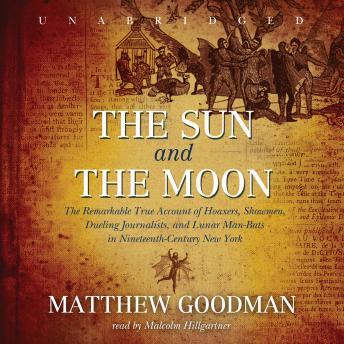 The Sun and the Moon: The Remarkable True Account of Hoaxers, Showmen, Dueling Journalists, and Lunar Man-Bats in Nineteenth-century New York

The Sun and the Moon tells the delightful and surprisingly true story of how a series of articles in the Sun newspaper in 1835 convinced the citizens of New York that the moon was inhabited. Purporting to reveal discoveries of a famous British astronomer, the series described such moon life as unicorns, beavers that walked upright, and four-foot-tall flying man-bats. It quickly became the most widely circulated newspaper story of the era.
Told in richly novelistic detail, The Sun and the Moon brings the raucous world of 1830s New York City vividly to life, including such larger-than-life personages as Richard Adams Locke, who authored the moon series but who never intended it to be a hoax; fledgling showman P. T. Barnum, who had just brought his own hoax to town; and a young Edgar Allan Poe, convinced that the series was a plagiarism of his own work.

Sun and the Moon: The Remarkable True Account of Hoaxers, Showmen, Dueling Journalists, and Lunar Man-Bats in Nineteenth-century New York