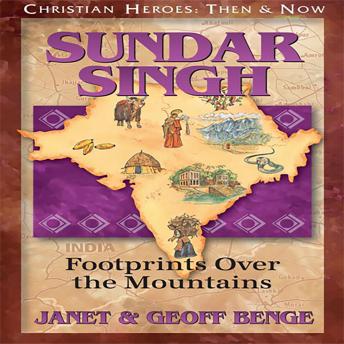 Sundar Singh: Footprints Over the Mountains

As Sundar preached the gospel to the crowd, the monastery guard marched forward and arrested him. Sundar was dragged to the edge of town and hurled to the bottom of an abandoned well. The air was putrid. Desperation and loneliness soon washed over him. Left to die, Sundar leaned against the side of the well and began to pray.

Searching since boyhood for the way to God, Sundar Singh found truth in Jesus Christ. At sixteen, the former Sikh became a Christian sadhu, or holy man, and at great risk devoted his life to Christ. With bare feet and few possessions, Sundar crossed the precarious Himalayas between India and Tibet many times, sharing the gospel with Hindus, Buddhists, Sikhs - even thieves.

As he traveled, Sundar constantly read the Bible, prayed, and meditated, confident that God was always with him, even in the face of death. Preaching in Asia, Europe, and as far away as America, this Indian saint impacted thousands with his quiet yet bold words and actions. (1889-1929)