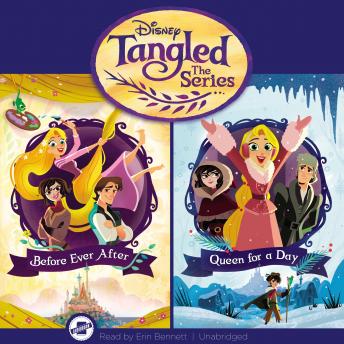 These special novelizations are based on Tangled: The Series, now airing on the Disney Channel. Set between the events of the original film and the start of Tangled Ever After, the series follows the long-locked Rapunzel as she acquaints herself with her parents, her kingdom, and the people of Corona.
Before Ever After
Rapunzel is back! And so is her hair. Rapunzel is about to be crowned Princess of Corona, and nothing could be better-or could it? As she gets the royal jitters, an evil mastermind plots to ruin her coronation day. Can Rapunzel and her friends stop the villain in time?
Queen for a Day
Winter is coming. When the king and queen of Corona go on a trip, Princess Rapunzel is in charge! She quickly learns that being a ruler is more difficult than it seems-especially when a huge snowstorm threatens the entire kingdom. Does Rapunzel have what it takes to be queen for a day?