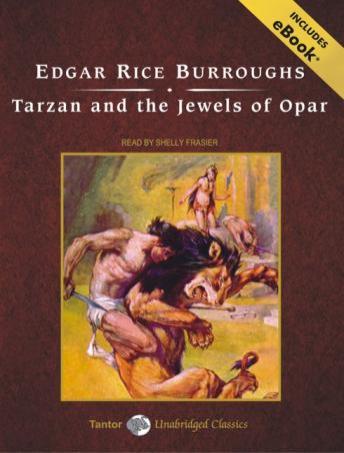 Tarzan and the Jewels of Opar

Edgar Rice Burroughs is the creator of one of the most iconic figures in American pop culture: Tarzan of the Apes. Tarzan and the Jewels of Opar is the fifth book in the Tarzan series and considered by many to be one of the best.

In one of his earlier adventures, Tarzan visited the mysterious, ruinous city of Opar that dated back to Atlantean times and was now inhabited by a strange horde of bloodthirsty, apelike priests headed by La, the High Priestess of the Flaming God. Thence, he brought back very little of the great store of ingoted gold hidden deep in a hill, and was rich for life.

In the current adventure, Tarzan returns to the gold-mining city of Opar to contend with greedy villains and the amorous attentions of the High Priestess. But the priests who work for her have other ideas-they don't intend to let Tarzan escape their sacrificial knives a second time.

Tarzan and the Jewels of Opar