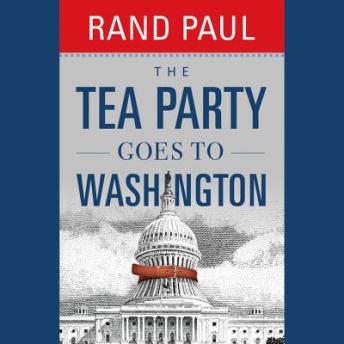 The Tea Party Goes to Washington

If the midterm elections were a declaration of war on the status quo, Rand Paul leads the battle charge. Voters fearful of growing government and debt have found voice in the Tea Party phenomenon and the movement continues to deliver a message that Washington, D.C. has found impossible to ignore.

In THE TEA PARTY GOES TO WASHINGTON, the newly elected senator and self-described 'constitutional conservative' explains why his party has to stand by its limited government rhetoric and why the federal government must be stuffed back into its constitutional box. Given the problems our nation faces, these are not mere suggestions, but moral imperatives.

Rand Paul and those who voted for him want to stop borrowing, end the bailouts, and entitlements and the spending. In THE TEA PARTY GOES TO WASHINGTON you'll learn:

Now is the time to get America back on track-- this is the moment of the new revolution that will take us back to our grass roots, to the country of our founding fathers.

It's a new day in Washington-- as the Tea Party graduates from populist outrage to political influence, Rand Paul stands poised to become one of its greatest champions.