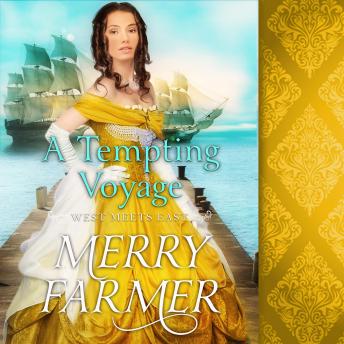 Captain Albert Tennant has lived most of his life on the sea, in spite of his noble status. It is his home and his passion. But the adventure of transporting several of the young women from Haskell, Wyoming to their new lives in England has highlighted how dull his own life has become. Until Domenica Ortega steps aboard his ship.


Domenica is more than ready to give up her life as a soiled dove for the promise of a fresh start that London provides. But beneath her brash, devil-may-care attitude lurks a secret fear that she hides from the world. It shakes her to her core that handsome Captain Tennant can see right through her mask to the heart she tries to keep hidden. And unlike any other man, Albert makes her feel safe.


When a member of Albert's crew goes missing halfway across the ocean, Domenica and Albert must discover what happened with very little evidence to go on. They have until the ship reaches London to uncover the perpetrator and bring them to justice. But mysteries are difficult to solve when temptation abounds, and the biggest question of all may be how Albert will be able to let Domenica go at the end of their voyage.


Narrated by the author, who is not a professional narrator, but is improving by leaps and bounds with each book.


A TEMPTING VOYAGE is the sixth book of the 6-book West Meets East series, which is a follow-up series to The Brides of Paradise Ranch, and includes:


It is also a prequel to DECEMBER HEART, the first book in The Silver Foxes of Westminster series.