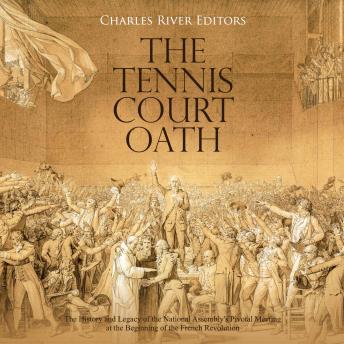 Tennis Court Oath, The: The History and Legacy of the National Assembly’s Pivotal Meeting at the Beginning of the French Revolution

As one of the seminal social revolutions in human history, the French Revolution holds a unique legacy, especially in the West. The early years of the Revolution were fueled by Enlightenment ideals, seeking the social overthrow of the caste system that gave the royalty and aristocracy decisive advantages over the lower classes. But history remembers the French Revolution in a starkly different way, as the same leaders who sought a more democratic system while out of power devolved into establishing an incredibly repressive tyranny of their own once they acquired it.

The French Revolution was a turbulent period that lasted several years, and one of the most famous events of the entire revolution came near the beginning with the Tennis Court Oath. By July of 1788, King Louis XVI agreed to call the Estates-General, a large, traditional legislative body, for the first time since 1614. The country's finances, already quite tenuous, reached a crisis stage in August 1788 as France faced bankruptcy.

Finally, in the spring of 1789, Louis XVI summoned the Estates-General. They were to convene at Versailles on April 27, but did not do so until May 5. Late elections continued into the summer as conditions around the country delayed many elections. At the same time, bread prices reached an all-time high, leading to riots throughout the country, particularly in Paris. During the formal ritual that welcomed the Estates-General on May 4, 1789, in a precursor of things to come in the following months, the Third Estate refused to kneel before the king. The deputies of the Third Estate came before the king, walking two at a time, and bowed before Louis XVI and Marie Antoinette. Not surprisingly, those witnessing the parade of the Estates-General had hoped for reform but came to expect that the Estates-General would serve as a tool of the administration.

Tennis Court Oath, The: The History and Legacy of the National Assembly’s Pivotal Meeting at the Beginning of the French Revolution

This title is due for release on May 13, 2020
We'll send you an email as soon as it is available!