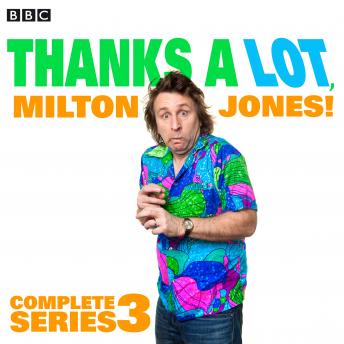 Thanks A Lot, Milton Jones!: Complete Series 3: 6 episodes of the BBC Radio 4 comedy

The man they call 'Britain’s Funniest Milton' and the genius in the mad shirts in “Mock The Week” stars in the third series of Thanks A Lot, Milton Jones! co-starring Tom Goodman-Hill ('Mr Selfridge', ‘Humans’), Josie Lawrence (Who’s Line Is It Anyway?), Ben Willbond (Horrible Histories, Yonderland) & Dan Tetsell (Mongrels).

“Milton Jones is one of Britain’s best gagsmiths with a flair for creating daft yet perfect one-liners” – The Guardian.

Mention Milton Jones to most people and the first thing they think is ‘Help!’.

And in this show he has decided to set himself up as a man who can help anyone anywhere - whether they need it or not. Because, in his own words - “No problem too problemy”. So when you’re close to the edge, then Milton can give you a push...

In the first of the complete six episodes, Milton gets to the bottom of things by founding a seat of learning... In Part two, when Milton becomes an expert genealogist and gets stuck up an unexpected family tree... In the next episode, why not sign on with Milton Prime, the pioneering audio comedy delivery service and listen to this week’s programme completely free! As Milton sets up his own delivery service...Part four, it’s “Pest Control to Milton Jones”, as he becomes an expert in clearing vermin... After that, why not sort out your life and sign on with the patent Milton Declutterering Method! (including getting rid of that extra “er” in Declutterering...) And in the final episode, a famous baker comes to the gym, and Milton decides it’s time to show off his nice buns...

“King of the surreal one-liners” - The Times

“If you haven’t caught up with Jones yet – do so!” – The Daily Mail

Thanks A Lot, Milton Jones!: Complete Series 3: 6 episodes of the BBC Radio 4 comedy