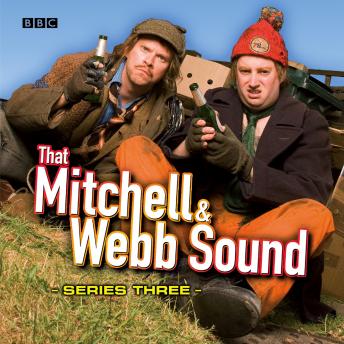 The first two series of That Mitchell and Webb Sound gained an army of fans, huge critical acclaim (Series Two won a Sony Silver Award) and led to a massively successful television series, That Mitchell and Webb Look. Here, the duo return to their radio roots, and this third fantastic series finds them in their finest ever sketch-show form. Meet the Stone Age flint-chippers who reckon bronze is just a fad; a very unpleasant man who wants to take you out for a little date; another thrilling adventure with Sir Digby Chicken-Caesar; and the world’s most mis-matched rally-driving couple – ‘Your voice makes me want to drive into a tree’. Whether sniping at ‘citizen journalism’, predictable radio plays or reality TV, here are lots of silly and clever sketches, with laugh-out-loud humour and painfully funny dialogue. As heard on BBC Radio 4, this complete third radio series also features Olivia Colman and James Bachman. ‘One of the best, most imaginative and intermittently eye-wettingly hilarious new comedy sketch programmes in years . . . wonderful, innovative comedy’ - Times. ‘Fresh, funny, inventive, daring’ - Daily Telegraph.