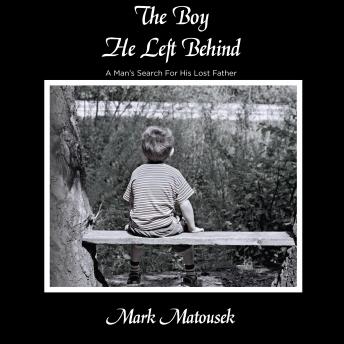 The Boy He Left Behind: A Boy's Search for His Lost Father

"I was four years old when my father came back to kidnap me," begins this gripping memoir about Matousek’s search for James Matousek, the drifter father he never knew. Described by the New York Times as "part reminiscence, part detective story, part spiritual musing," this memoir is more than the story of one man’s search for his father; it is also a look at the meaning of life and how fathers contribute to that meaning.

Growing up in a family of troubled women (Matousek’s sister committed suicide when the author was 29), he describes the turmoil of growing up “fatherless in America” – an experience shared by millions of children in what sociologists have called the Age of the Absent Father – and the difficult, ultimately successful, struggle to figure out what being a man really means in an age of shifting definitions, evolving sexuality, and "breaking out the man box" of stereotyping and patriarchy. With the tension of a mystery story, the climax occurs when Matousek meets a man he believes to be his father. But is he? And does Matousek, who has reconciled with his mother as she lay dying, really care? These are just two questions leading to this memoir’s surprising conclusion.

Boy He Left Behind: A Boy's Search for His Lost Father