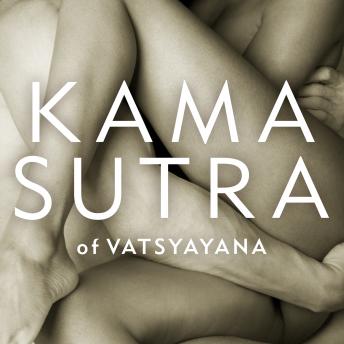 The Kama Sutra of Vatsyayana

The Kama Sutra is an ancient Sanskrit text written some fifteen hundred years ago that has gained the reputation of being a raunchy sex manual. Which to some degree it is. But the chapter "On sexual union" is only one of seven which deal with many other aspects of love and life. When viewed in context, it's a fascinating, practical guide not just to relationships between the sexes, but to living an accomplished and fulfilled existence. And we can learn a lot from it, even now.

Originally written (or perhaps more properly assembled) by the philosopher Vatsyayana, the Kama Sutra came to the attention of the English-speaking world following the publication of Sir Richard Burton's translation in 1883, which is the version we've adapted for this audio.

Of course, the Society for the Suppression of Vice was quickly onto him (this was after all the Victorian era when a glimpse of stocking was looked on as something shocking), but Burton got round the strict laws governing pornography by having the Kama Sutra privately published for the Kama Shastra Society, which he formed especially for the purpose. And so the text has come down to us.

Being originally written in a male-dominated society, the female partner is regarded as very much the second-class citizen - but not quite as much as one might expect. Vatsyayana, and the civilization of which he was part, realized that it takes two to tango, and there are many areas of the text in which the intellectual cultivation of women is strongly encouraged. In addition, the female is not exclusively the shrinking violet who exits solely to do the man's bidding: indeed, she initiates a good deal of the proceedings.

Listen for yourself and find out the truth behind one of the most notorious works in literary history.