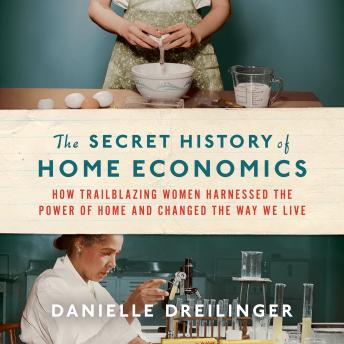 The Secret History of Home Economics: How Trailblazing Women Harnessed the Power of Home and Changed the Way We Live

The term 'home economics' may conjure traumatic memories of lopsided hand-sewn pillows or sunken muffins. But common conception obscures the story of the revolutionary science of better living. The field exploded opportunities for women in the twentieth century by reducing domestic work and providing jobs as professors, engineers, chemists, and businesspeople. And it has something to teach us today.

In the surprising, often fiercely feminist, and always fascinating The Secret History of Home Economics, Danielle Dreilinger traces the field's history from Black colleges to Eleanor Roosevelt to Okinawa, from a Betty Crocker brigade to DIY techies. These women-and they were mostly women-became chemists and marketers, studied nutrition, health, and exercise, tested parachutes, created astronaut food, and took bold steps in childhood development and education.

Home economics followed the currents of American culture even as it shaped them. Dreilinger brings forward the racism within the movement along with the strides taken by women of color who were influential leaders and innovators. She also looks at the personal lives of home economics' women, as they chose to be single, share lives with other women, or try for egalitarian marriages.

As a high school student in the early 70s, I aspired to become a Home Economist, either in the business venue or as a home extension agent. However, by the end of the decade with my degree in hand, it was as if the dust bowl had blown away all jobs and opportunities for the profession, save a few positions in southern states or where school districts had not done away with the elective courses. I am thrilled by the turn around in the last few years in the interest of traditional subjects of clothing construction, food preparation and preservation, and home decor. This resurgence has shown that while it may have been done away with or thought of as passé, the opposite is true. My degree has been a great benefit to me, so I echo Danielle’s plea, “Bring it Back!”