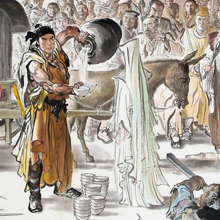 The Semi- gods and the Semi-devils

During the Northern Song dynasty, a number of kingdoms, like Song, Liao, Western Xia, Dali, exist and have fights constantly. Duan Yu, the son of Zhennan king of Dali Kingdom in Yunnan, comes to Wuliang Mountain to escape from studying martial arts. By chance, he learns some odd martial arts, later is caught and brought to Jiangnan by Jiu Mozhi, the Imperial Advisor of Tufan Kingdom, and then he becomes sworn brothers with Qiao Feng, the chief of the largest sect—Beggars’ Sect. Qiao Feng is blamed for his Khitan origin, and falls from grace all in a sudden. To find the truth about his birth, Qiao Feng travels around to find clues, but hurt and framed by bad people several times, and he even kills his lover A Zhu by mistake. Later he travels to Liao Kingdom to cure A Zhu’s sister A Zi’s illness, and becomes Nanyuan King of Liao Kingdom. Xuzhu, a monk from the Shaolin Sect, by coincidence and sheer luck, he breaks a weiqi formation and inherits the powers of Wuyazi, the leader of the Carefree Sect. Later, he becomes sworn brothers with Duan Yu and Qiao Feng.When Liao invades Song, Qiao Feng is kind and doesn’t want to see the bloodshed, so he forces the king of Liao to promise not to start war against Song in his lifetime.

The Semi- gods and the Semi-devils