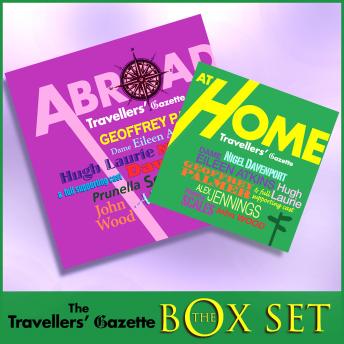 The Travellers Gazette BOX SET: A journey alongside the British Traveller at Home & Abroad in two volumes. A full-cast audio.

We follow in the footsteps of the intrepid British traveller as they explore the world both At Home and Abroad, told entirely in the words of those who were there. In TWO volumes.
TRAVEL at HOME Gazette: A fascinating ramble through the towns and villages of the British Isles during the last 400 years in the company of Jane Austen, William Cobbett, Daniel Defoe, James Lees Milne, Sir Walter Scott, Virginia Woolf and many more.
TRAVEL ABROAD Gazette: An entertaining collection of traveller's tales as we explore the far-flung shores of the world alongside some of Britain’s finest Chroniclers. Join Charles Darwin, Kenneth Williams, Fanny Trollope, Sir Ernest Shackleton, Mungo Park, Horace Walpole, Wilfred Thesiger, James Boswell, Nancy Mitford and many others on your journey.
Performed by an outstanding company of award-winning actors including Dame Eileen Atkins, Cheryl Campbell, Nigel Davenport, Alex Jennings, Richard Johnson OBE, Hugh Laurie CBE, Michael Maloney, Geoffrey Palmer OBE, Michael Pennington, Prunella Scales CBE, Samuel West & John Wood CBE with a full supporting cast.
Also available as part of The Gazettes Box Set, a six-volume edition (Military, Sport & Travel) creating a vivid portrait of British life through the centuries.
“It is a highly enjoyable collection. Some pieces are just dazzling.” Independent on Sunday
“An extraordinary series... deserves a medal. The readers are all excellent and many of them distinguished.” The Spectator
“From the same stable that produced The Chronicle, my favourite audio this year, I've just listened equally spellbound to a compilation of travellers' tales at home.” The Guardian
“Time travel as well as the geographical kind is offered in this anthology, which takes extracts from books, journals, letters and newspapers to form a collage of impressions and details of the British Isles over the past 400 years, with a cast of big-name readers.” Sunday Times
© & ℗ 2022 Mr Punch Audiobooks Ltd

This title is due for release on April 20, 2022
We'll send you an email as soon as it is available!