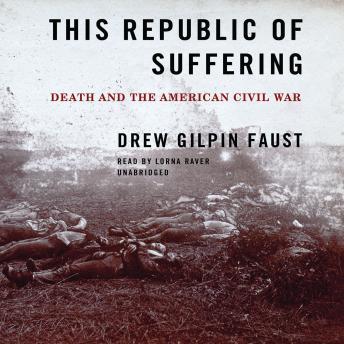 This Republic of Suffering: Death and the American Civil War

During the Civil War, 620,000 soldiers lost their lives-equivalent to six million in today's population. This Republic of Suffering explores the impact of the enormous death toll from material, political, intellectual, and spiritual angles.
Drew Gilpin Faust delineates the ways death changed not only individual lives, but the life of the nation, and describes how a deeply religious culture reconciled the slaughter with its belief in a benevolent God. Throughout, the viewpoints of soldiers, families, statesmen, generals, preachers, poets, surgeons, and nurses, Northerners and Southerners, slaveholders and freed people, the most exalted, and the most humble are brought together to give a vivid understanding of the Civil War's widely shared reality.

This Republic of Suffering: Death and the American Civil War