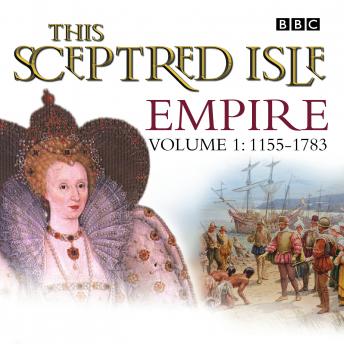 This is volume 1 of the eagerly-awaited follow-up to Christopher Lee’s highly-acclaimed and award-winning BBC Radio 4 series. The original ground-breaking series of 'This Sceptred Isle' was a compelling, continuous narrative, from the arrival of the Romans to the end of the twentieth century. This new series explains how Britain, through trading in such commodities as sugar, spice - and slaves - built the biggest empire the world had ever known. At one time a quarter of the global land mass was under British rule: so whatever the day, whatever the hour, the sun never set on the Empire. Christopher Lee begins Volume 1 with the colonisation of Ireland by Henry II in 1155. Following the growth of Elizabethan exploration with John Cabot, Francis Drake and Walter Raleigh, outposts in North America and the West Indies gradually became established and successful, while the East India Company was gaining an even firmer foothold in India. Juliet Stevenson, as narrator, takes us through triumphs and disasters - to the British defeat at Yorktown in 1783 and the independence of the United States of America. Using a range of contemporary documents read by Rob Brydon, Martin Freeman, Mark Heap, Anna Massey and Robert Powell, this is an informative, engaging and fascinating insight into the rise - and eventual fall - of the British Empire.