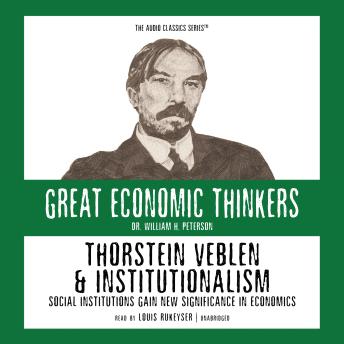 Institutionalism is an economic point of view that emphasizes the role of social organization and structure in modern economic life. Thorstein Veblen (1857–1929), an American son of Norwegian immigrants, was instrumental in creating this school of thought in the early twentieth century, and he vigorously attacked what he regarded as the privileged “leisure class” in America.
To institutionalists, the important “institutions” of economic life include customs, habits, morals, and laws. These are believed to be more important in shaping economic life than are marketplace principles. Institutionalists emphasize a historical interpretation of social life, asserting that economic generalizations should be relevant to time and place. Institutionalist ideas greatly influenced economic policies that were created in response to the Great Depression.
The Great Economic Thinkers series is a collection of presentations that explain, in understandable language, the major ideas of history’s most important economists. Special emphasis is placed on each thinker’s attitude toward capitalism, revealing their influence in today’s debate on economic progress and prosperity.

This title is due for release on April 6, 2006
We'll send you an email as soon as it is available!