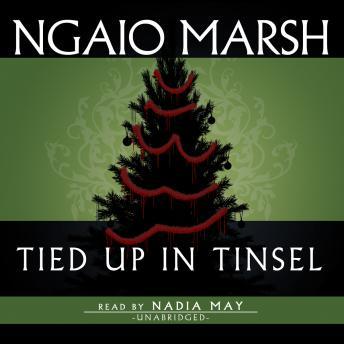 Tied Up in Tinsel

An English manor house on the moors is an ideal setting for a murder-and for one of Ngaio Marsh's classic murder mysteries.
The occasion is a Christmas party hosted by Mr. Hilary Bill-Tasman, landed proprietor of Halberds Manor and authority on antiques. Santa Claus is in attendance, played by a highly unpopular servant. When he goes missing after his performance, foul play is immediately suspected. There are a number of unusual characters attending the festivities, several of whom are perfectly logical candidates for murderer-and one of whom will elude the most prescient listener until tracked down by the indefatigable Inspector Roderick Alleyn, whose wife, Troy, innocently involved him in all these sinister goings-on in the first place.

Tied Up in Tinsel