A Trace of Copper: A Steampunk Romance 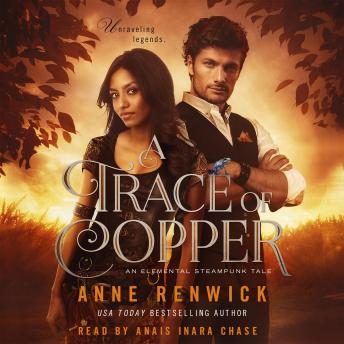 A small Welsh village. An interrupted romance. A rogue frog on the loose threatening their future.

New recruit to the Queen's agents, Dr. Piyali Mukherji is given a simple first assignment. Travel to the small Welsh village of Aberwyn and solve the mystery of a young woman's blue skin lesion. A challenging task, for the alarming infection is unlike anything she's seen before—and it's spreading.

Evan Tredegar, the town's pharmacist and the only man to ever capture her heart, knows more than he's telling. Despite his efforts to push her away, her touch reawakens old desires. As more villagers fall victim to the strange disease, he'll have no choice but to reveal his secrets, even if it means sacrificing his freedom.

Together they must move past broken promises, capture a rogue frog, and stop the infection before it spreads out of control.


A TRACE OF COPPER is a story set in the Elemental Steampunk World. Steampunk adventure wrapped around a romance and threaded with biotechnology. Join USA Today bestselling author, Anne Renwick, as she takes you back into an alternate past.


- A Trace of Copper, In Pursuit of Dragons, A Reflection of Shadows, A Snowflake at Midnight, A Ghost in Amber


- The Tin Rose, Kraken and Canals, Rust and Steam

Trace of Copper: A Steampunk Romance

This title is due for release on May 25, 2019
We'll send you an email as soon as it is available!