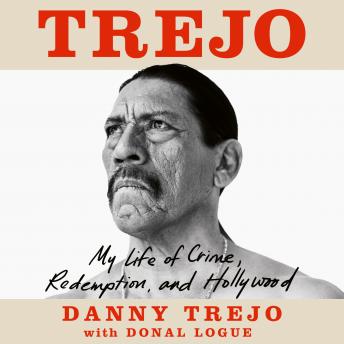 Trejo: My Life of Crime, Redemption and Hollywood

On screen, Danny Trejo is the most recognisable anti-hero in Hollywood - killed at least a hundred times, he steals every scene he's in. But off screen, he is so much more. The ultimate hard-knock-lifer, and a true man of the world, he has all the stories, and all the scars.

Raised in an abusive home, Danny struggled from an early age with heroin addiction and doing time in some of the country's most notorious state prisons, including Folsom and San Quentin - where he met Charles Manson - before starring in modern classics and cult hits alike, such as Heat, Breaking Bad, From Dusk Till Dawn, Sons of Anarchy, Desperado, Machete and scores more. Now, Danny takes us through the peaks and valleys of his life, including meeting one of the world's most infamous serial killers and working with icons like Charles Bronson and Robert De Niro.

In raw detail, Danny recounts how he managed the horrors of incarceration, rebuilt his life, and drew inspiration from the adrenaline-fueled robbing heists of his past for the film roles that forged his legend.

Redemptive, poignant, and raw, Trejo is a portrait of a magnificent life and an unforgettable journey through tragedy, pain, and, finally, success. Told with cowboy appeal, gritty rebel wisdom, and total honesty, these are outlaw stories from the frontiers: the frontiers of prison, of Hollywood, and of life.

Includes an exclusive bonus track with Donal Logue sharing his favourite stories about his friendship with Danny and writing the book together.

Such an amazing book and not a moment where the story dragged or dropped. 10/10 recommend. Only negative would be he is not unfortunately the best reader so the narration doesn’t flow but I found if you speed it up slightly it flows better

Haven't finished the book, but I'm loving every second of it. I have to admit that I got this one in a 2x1 offer and it didn't disappoint. Gut-wrenching at times, and narrated by Trejo himself, offers a story that goes from the crudest things in his early life all the way to his success at Hollywood. However, the best thing was the begining, where Trejo says that he dedicates this book to all inmates, and that he prays for them. It made me think that they can also redeem themselves, that Jesus can always light the way to everyone. Also, I admit that Trejo has a special place in my heart because of Machete (yeah, I'm that kid who enjoyed and still enjoys Spy Kids).

A great life lived. his early years and his prison life were crazy. I like the message of kindness that comes from this book and hope for people with addictions. Got a little bit bored during the Hollywood years.