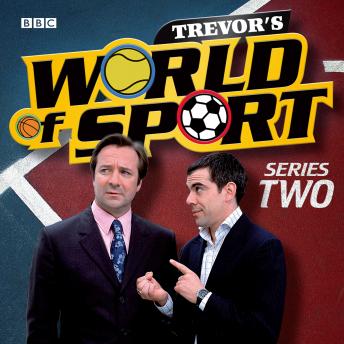 The second series of Andy Hamilton's hit BBC Radio 4 comedy, starring Neil Pearson as beleaguered sports PR agent Trevor. 'Funny and very likeable' - Independent 'Nice lines and a superb cast' - Times Welcome back to TS Sports Stars Agency as we rejoin Trevor and Sammy, who continue to deal with their bizarre clientele in their own, very different ways while trying to keep on top of the personal catastrophes going on in the rest of the office. Sammy's moral compass is still pointing a little south of the truth as he justifies chasing 'unreasonable' traffic wardens and endeavours to romance lesbian receptionist Heidrun. Trevor, meanwhile, is trying to keep his scruples while grappling with a racist young tennis star, a psychotic footballer with a penchant for threesomes with Brazilian twins, an over-the-hill rugby veteran and an obnoxious Paralympics medal winner. Barry, as ever, is the thorn in everyone's side, and on top of everything, Trevor's estranged wife Meryl is writing a novel about the collapse of a fictional marriage that sounds a little too familiar... This second series of the Radio 4 show from the pen of Andy Hamilton reunites the staff of the TS office, along with guest appearances from Jake Wood ('EastEnders') and Gina Yashere, for a deliciously witty journey through the cut-throat world of sporting celebrity.