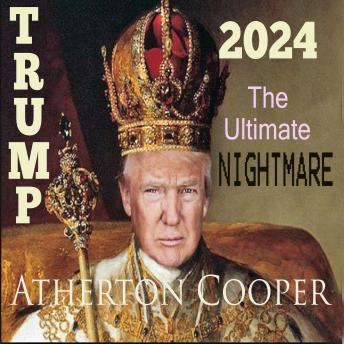 Trump 2024 - The ultimate nightmare. That's what some are calling the prospect of another four years of Donald Trump as President.
Certainly, whichever side of the political spectrum you're on, it's clear his opinion notwithstanding, that Trumps statements and actions , rather than 'making America great', are dividing it.
And favoring certain segments of the population over others.
Then there are the dark clouds of scandal, inappropriate and illegal behaviour that have envolved the Trump White House. With, as you are well aware, many of his former associates doing jail time. And as investigations continue, certainly more to come.
The Donald, after portraying himself, falsely, as a great businessman who would run America like a business, has, in reality, run America into the ground. Gutting environmental protections, starting trade wars, and cuddling up to International Right Wing dictators.
But the ultimate nightmare of four more years of the bully from Queens, would be his control of the courts.
Imagine an America with every judge, at every judicial level, of the calibre of Brett Kavanaugh. All singing the praises of, and bowing down to King Donald.
This is the course Trump and Mitch Mcconnell are now forging ahead with. Creating a Judicial system where only the Donald can win.
In this no holds barred book, Investigative Reporter Atherton Cooper dives into the swamp of lies, deceit , illegally and immorality that are the stock in trade of the current occupant of the white house.