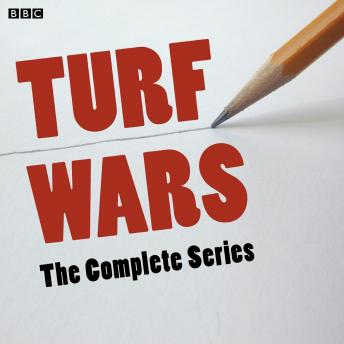 Four comic dramas about boundaries that are both territorial and personal, as heard on BBC Radio 4.Territory is the theme that unites these four humorous plays - whether that means fighting over an allotment plot, dealing with the sudden partition of a country, guarding the privacy of a garden or battling with the council over school catchment areas.In ‘Losing the Plot’, shy Edward decides to apply for an allotment plot after an encounter with attractive allotment-holder Amanda. But doing so involves an interview with ferocious site-manager Bernie who runs the allotments with military rigour. Starring James Fleet as Edward, Joanna Monroe as Amanda and Jonathan Coy as Bernie. Written by Nick Warburton and directed by Peter KavanaghIn ‘An Incident at the Border’, Arthur and Olivia are enjoying the sun in their local park on a beautiful summer's day. Olivia is reading a newspaper article on their country's new-found independence. Arthur, who is apolitical, is just enjoying watching the ducks. Suddenly a soldier arrives, dragging a tape across the ground, marking out the new border. He barges between the two young people. Now one is on one side of the border, and one on the other! How can the lovers be reunited? Starring Joseph Kloska as Arthur, Leah Brotherhead as Olivia and Nigel Planer as Reiver. Written by Kieran Lynn and directed by Peter Kavanagh.In ‘How’s Your Mother?’ Humphrey Partridge is reckoned to be anti-social, indeed stand-offish. But he always has an excuse – namely that he has to look after his ailing elderly mother. No-one has ever met the legendary matriarch. Not even nosy Raj the local postman. But one morning when Humphrey is at work, Raj notices a fire in Humphrey's house, breaks in to put it out and makes an extraordinary discovery. Soon police are digging in Humphrey's garden. But just what is Humphrey's dark secret? Starring Michael Maloney as Humphrey Partridge, Adeel Akhtar as Raj/Sgt Wallis, Sam Dale as Mr Denton/Trevor, Sally Orrock as Mrs Denton and Christine Kavanagh as Mrs Jones. Written by Simon Brett and directed by Peter Kavanagh.In ‘The Accidental Head’, Beth just wants what's best for her 11 year old son; a solid secondary education at the kind of school that recognises his genius, as well as his aptitude for baroque music. A school like Folgate. But when the family is edged out of Folgate's catchment area, a battle begins Starring Katherine Parkinson as Beth, Darren Boyd as Jake, Emma Fryer as Ruth Willith, Alex Tregear as the journalist, Sally Orrock as Helen and Brian Bowles as Farmer/Hughes. Written by Jeremy Front and directed by James Robinson