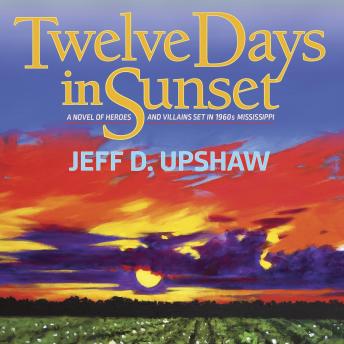 Twelve Days in Sunset: Heroes and villains in 1960s Mississippi

Bull Santee, a thirteen-year-old black boy, is being held by the sheriff of tiny Sunset, Mississippi, for sneaking into a white man's backyard and brutally beating his pet dog to death. But Shy Brown knows Bull didn't do it. How does Shy, a privileged white kid from Memphis and the grandson of one of the most important men in Sunset, get involved in something as ugly and disturbing as this? What does Shy know? How does he know it? And what is he going to do about it?Twelve Days in Sunset chronicles a 1967 summer stay at twelve-year-old Shy Brown's grandparents' house in Sunset. For the first time, the sheltered Shy faces bullying, hatred, and racism. Yet he also discovers loyalty, honor, and friendship in a way his cloistered life back in Memphis would never have afforded. The special bond between Shy and Queen, the family’s black cook, lasts a lifetime.

Twelve Days in Sunset: Heroes and villains in 1960s Mississippi