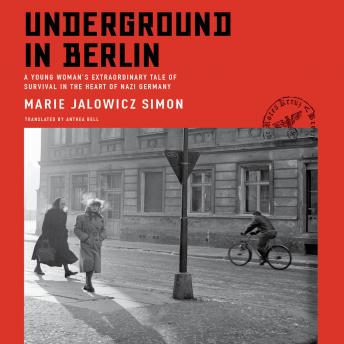 Underground in Berlin: A Young Woman's Extraordinary Tale of Survival in the Heart of Nazi Germany

A thrilling piece of undiscovered history, this is the true account of a young Jewish woman who survived World War II in Berlin.

In 1942, Marie Jalowicz, a twenty-year-old Jewish Berliner, made the extraordinary decision to do everything in her power to avoid the concentration camps. She removed her yellow star, took on an assumed identity, and disappeared into the city.

In the years that followed, Marie took shelter wherever it was offered, living with the strangest of bedfellows, from circus performers and committed communists to convinced Nazis. As Marie quickly learned, however, compassion and cruelty are very often two sides of the same coin.

Fifty years later, Marie agreed to tell her story for the first time. Told in her own voice with unflinching honesty, Underground in Berlin is a book like no other, of the surreal, sometimes absurd day-to-day life in wartime Berlin. This might be just one woman's story, but it gives an unparalleled glimpse into what it truly means to be human.

Underground in Berlin: A Young Woman's Extraordinary Tale of Survival in the Heart of Nazi Germany