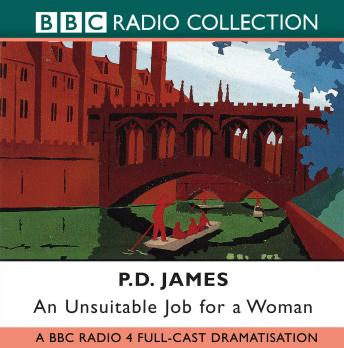 An Unsuitable Job For A Woman

Judi Bowker and Anna Massey star in this gripping BBC Radio 4 full-cast dramatisation featuring young detective Cordelia Gray. Mark Calendar, 21 years old and in his final year at Cambridge, leaves university without warning and takes a job as a gardener. Eighteen days later he is found hanging in the cottage where he lived. The verdict at the inquest is suicide. Cordelia Gray, now sole proprietor of the Pryde Detective Agency, is hired by Mark's father, the eminent scientist Sir Ronald, to piece together the facts surrounding his death. Gradually she sheds light on the apparent suicide, and long-suppressed family secrets begin to emerge. Whilst further tragedy is in store for the family, Cordelia discovers that, in the midst of Mark's many friends, there is a dangerous enemy with the cold and complex mind of a killer.

Unsuitable Job For A Woman