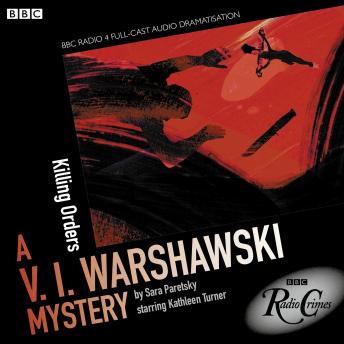 Feisty Chicago private eye Vic 'V.I.' Warshawski is used to getting mixed up in complicated cases. But when three million dollars in share certificates are stolen from a Dominican priory, she really doesn't want to get involved. Because agreeing to investigate would mean doing a favour for Aunt Rosa, the priory's treasurer, and Vic has never forgiven Rosa for something she did a long time ago. Against her better judgement, Vic gets drawn in, only to be suddenly called off the case. But she doesn't give up easily and, despite a campaign of intimidation against her, starts to uncover a massive conspiracy involving the Mafia and the Catholic church... Starring Kathleen Turner as V.I. Warshawski, and with a star cast including Martin Shaw, Adjoa Andoh and Lorelei King, this gripping drama will appeal to all fans of Sara Paretsky's hardboiled heroine.