The Very World Of Milton Jones: The Complete Series 2 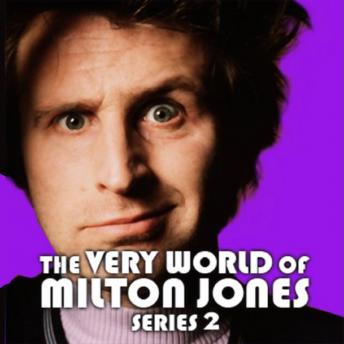 In 1998, BBC Radio 4 found it had a new star on its hands. From the opening monologue - 'when the boys in the playground found out that I had a potentially fatal allergy to peanuts they used to shove me up against a wall and make me play Russian roulette with a bag of Revels' to the closing number -'Milton Jones, Milton Jones, so good they named him' - everything about the show was different, weird and funny, and the first series won a British Comedy Award nomination. In this second series, Milton finds his life flashing before his eyes as he faces Mexican bandits and is struck by lightning. His search for Santa in the Arctic leaves him freezing to death; and he faces his guardian angel when he is knocked over at the Cannes Film Festival. When he is crushed by a printing press, it seems the end is nigh - but he narrowly escapes, only to face certain death by a shark... Join 'Britain's funniest Milton' in these six hilarious, death-defying episodes, also featuring Alexander Armstrong, Melanie Hudson, Joanna Scanlan and Dave Lamb.