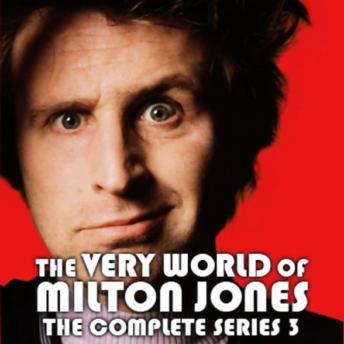 The Very World Of Milton Jones: The Complete Series 3

The man they call 'Britain's funniest Milton' is back with a fully-working cast and a shipload of new jokes. In these six episodes, Milton's Moon trip ends up on Mars, where his space suit fails. Drowning in a sea of shark's fin soup, his life as celebrity chef comes back to haunt him; and plunging from a New York skyscraper, he recalls his time as a business guru. When he opens an Egyptian tomb and falls into a snake pit, death stares him in the face; and his Olympic marathon triumph is halted when his life flashes before his eyes. Finally, while going for a walk in Wales with his son and dog, Milton falls into a river. Is this the end for Milton Jones? This third series of the hit comedy also stars Alexander Armstrong (The Armstrong and Miller Show), Melanie Hudson (I'm Alan Partridge, Do Go On), Morwenna Banks (Absolutely), Dave Lamb (Cheeseshop, Goodness Gracious Me) and Joanna Scanlan (Channel 4's Coming Soon).