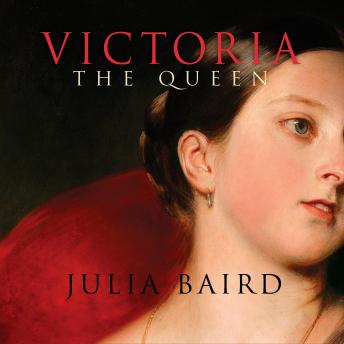 Victoria The Queen: An Intimate Biography of the Woman Who Ruled an Empire

When Victoria was born, in 1819, the world was a very different place. Revolution would threaten many of Europe's monarchies in the coming decades. In Britain, a generation of royals had indulged their whims at the public's expense, and republican sentiment was growing. The Industrial Revolution was transforming the landscape, and the British Empire was commanding ever larger tracts of the globe. In a world where women were often powerless, during a century roiling with change, Victoria went on to rule the most powerful country on earth with a decisive hand.

Fifth in line to the throne at the time of her birth, Victoria was an ordinary woman thrust into an extraordinary role. As a girl, she defied her mother's meddling and an adviser's bullying, forging an iron will of her own. As a teenage queen, she eagerly grasped the crown and relished the freedom it brought her. She was outspoken with her ministers, overstepping conventional boundaries and asserting her opinions. And as science, technology, and democracy were dramatically reshaping the world, Victoria was a symbol of steadfastness and security-queen of a quarter of the world's population at the height of the British Empire's reach.

Victoria The Queen: An Intimate Biography of the Woman Who Ruled an Empire