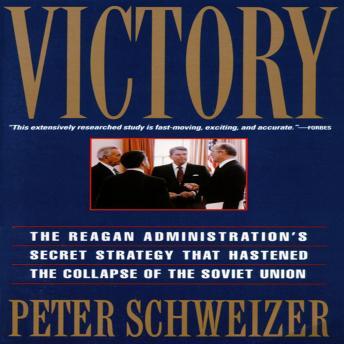 This explosive book chronicles why and how Ronald Reagan helped to bring down the Soviet Union. Based on exclusive interviews with key participants including Caspar Weinberger, George Schultz, John Poindexter, Robert McFarlane, and William Clark, Peter Schweizer provides the riveting details of how the Reagan inner circle undermined the Soviet economy—and its dwindling resource base—to subvert the Kremlin’s hold on its global empire. Using secret diplomacy, the administration dramatically reduced Soviet income while simultaneously driving Moscow to expend an increasing amount of precious assets; they also provided covert aid to indigenous forces in Poland and Afghanistan to roll back Soviet power. In Victory, Schweizer presents a compelling argument for the Reagan administration’s calculated strategy that is impossible to ignore.