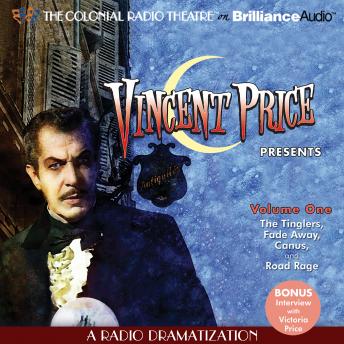 The Tinglers - from an original story by Mark L. Miller

In this sequel to the Vincent Price classic The Tingler, Dr. Chapin and his crew search for a primitive tribe with ties to the elusive creature that is spawned from fear with a grip like iron. What they find in the dark jungle gives new meaning to the word terror!

Fade Away - from an original story by Nick Lyons
Private Eye Frank Wood is investigating the mysterious break-ins at the home of a wealthy old man named Jack Leonard. Is there really an intruder or is Jack losing his mind-seeing someone, or something, that isn''t really there?

Canus - from an original story by Chad Helder
In this macabre tale where gothic horror meets the perversions of science, a young boy must survive a bizarre rite of passage-he must confront a creature deep within a mad scientist''s dungeon!

Road Rage - from an original story by Darren G. Davis and Paul J. Salamoff
An advertising executive involved in a little fender-bender must suffer through a nightmare- the retribution of a sinister adversary with a twisted mind.