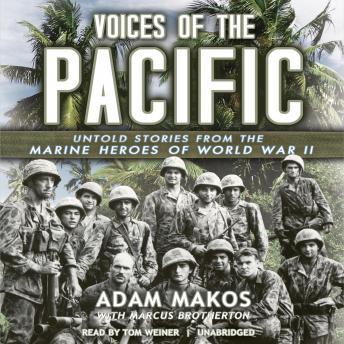 Voices of the Pacific: Untold Stories from the Marine Heroes of World War II

Chroniclingthe United States Marine Corps' actions in the Pacific theater of operations, Voicesof the Pacific presents the true stories of heroism and honor as told bysuch World War II veterans as Sid Phillips, R. V. Burgin, and Chuck Tatum-whoseexploits were featured in the HBO miniseries The Pacific-and theirmarine buddies from the legendary First Marine Division.
Followingfifteen marines from the Pearl Harbor attack and intense boot camp trainingthrough battles with the Japanese on Guadalcanal, Cape Gloucester, Peleliu, andOkinawa to their return home after V-J Day, Adam Makos and Marcus Brothertonhave compiled an oral history of the Pacific War in the words of the men whofought on the front lines. With unflinching honesty, these marines revealharrowing accounts of combat with an implacable enemy, the friendships andcamaraderie they found-and lost-and the aftermath of the war's impact on theirlives.
Withunprecedented access to the veterans and unpublished memoirs, Makos andBrotherton have forged Voices of the Pacific into an incredible historicrecord of American bravery and sacrifice.

Voices of the Pacific: Untold Stories from the Marine Heroes of World War II