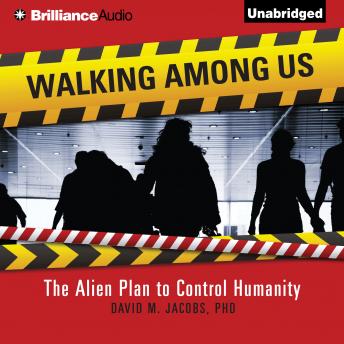 "Walking Among Us is a chronicle of human experience that contradicts every current theory about the universe that we think we live in. Jacobs' human observers have experienced a concealed reality that is literally next door to some of us, and that he believes is about to interact, secretly and insidiously, with the rest of us. Walking Among Us explains why extraterrestrial UFOs are here, who is aboard them, and what they are doing. To put it mildly, the evidence from the people that Jacobs has interviewed shows that the extra-terrestrials are up to no good. You will find Walking Among Us hard to put down. If enough of us read and pay attention to the evidence in this book, we might be able to avoid the disaster that its evidence portends." -DON C. DONDERI, PhD, associate professor (retired) of psychology, McGill University, Montreal, author of UFOs, ETs, and Alien Abductions

"Once we accept the extraterrestrial origin of UFOs and that the beings can act purposefully as rational beings invariably do, it is only a small step from UFO phenomena to the co-residency of the two species. It is this logical consistency that makes Walking Among Us constantly grip our imagination with such vengeance." -YOUNG-HAE CHI, D Phil, faculty of Oriental Studies, University of Oxford

"David Jacobs has spent his career as a history professor at a major university, and-what matters most of all-he backs his claims with an impressive mass of evidence. Jacobs treats his subject with ethnographic depth and detail, but without academic ponderousness." -THOMAS E. BULLARD, PhD, board member, Center for UFO Studies and Fund for UFO Research, and author of UFO Abductions: The Measure of a Mystery