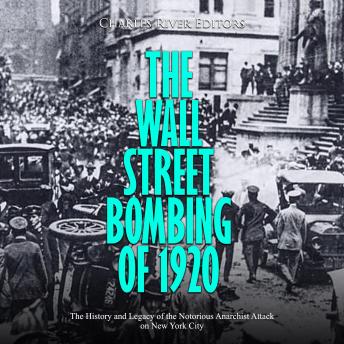 Wall Street Bombing of 1920, The: The History and Legacy of the Notorious Anarchist Attack on New York City

One September day, New York City suffered a devastating act of domestic terrorism, but that day was not the 11th, and the attack took place over 80 years before the most notorious terrorist attack on America. In 1920, an explosion in the Financial District of New York City killed 38 people, injured hundreds more, and caused damage that is still visible on some of Wall Street’s most famous buildings today. Although the attack has largely been forgotten, in terms of casualties, it was the worst act of terrorism in the United States until the bombing in Oklahoma City conducted by Timothy McVeigh in 1995.

The investigation into the bombing involved 10 government agencies and extended across the world, yet after three years of intensive work, investigators were finally forced to admit that they had no idea who had planted the bomb. Subsequent investigations have uncovered many suspects, but no one was ever charged with offenses related to the explosion, even as suspicions have always fallen on anarchists, political activists who sought revolutionary change.  In America, which had large immigrant communities, these movements gained increasing numbers of followers, so when a bomb exploded on Wall Street, the heart of the American financial system, it was perhaps natural that suspicions immediately fell on anarchist movements. Was this an attempt to destabilize capitalism in America or even to assassinate leading figures in the financial world? Finding clear answers to those questions proved beyond the capacity of the agencies tasked with investigating the bombing. Even now, there is no certain answer as to who planted the Wall Street bomb, but it has long been attributed to anarchists.

Wall Street Bombing of 1920, The: The History and Legacy of the Notorious Anarchist Attack on New York City