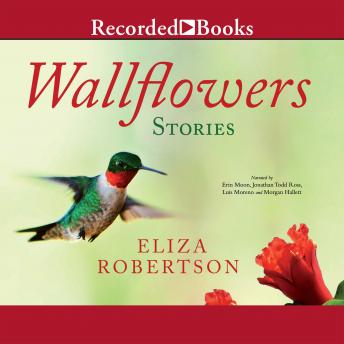 In the opening story of Wallflowers, a girl is cat-sitting for her neighbor, sleeping in the neighbor's house. It's nearly identical to her mother's nearby-in the Copper Waters subdivision, they all are-but she likes it here, eating boiled eggs and watching TV, feeling out her freedom as heavy rains fall. And then a nearby dike fails. And the girl may be the only one left in Copper Waters. Eliza Robertson can handle the shocking turn, but she also has a knack for the slow surprise, the realization that settles around you like snow. Her stories are deftly constructed and their perspectives-often those of the loners and onlookers, distanced by their gifts of observation-are unexpected. In 'We Walked on Water,' winner of the Commonwealth Short Story Prize, a brother and sister train together for a race that will ultimately separate them forever. In 'L'Etranger,' shortlisted for the CBC Short Story Prize, a girl abroad in Marseille reconsiders her unendearing roommate after an intimate confrontation. Robertson was raised on rugged Vancouver Island. She's traveled broadly since, and her stories travel, too, but the climate of her collection is influenced by her home. These carefully cultivated forms still flare with wildness, and each is still spacious enough for a reader to get lost in wonder.

This title is due for release on November 20, 2015
We'll send you an email as soon as it is available!