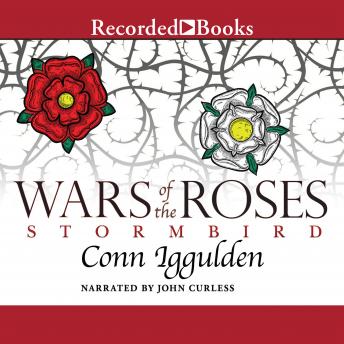 Wars of the Roses: Stormbird

In 1437, the Lancaster king Henry VI ascends the throne of England after years of semi-peaceful regency. Named 'The Lamb,' Henry is famed more for his gentle and pious nature than his father's famous battlefield exploits; already, his dependence on his closest men has stirred whispers of weakness at court. A secret truce negotiated with France to trade British territories for a royal bride-Margaret of Anjou-sparks revolts across English territory. The rival royal line, the House of York, sees the chaos brought on by Henry's weakness and with it not only opportunity in the monarch, but also their patriotic duty in ousting an ineffectual king. As storm clouds gather over England, King Henry and his supporters find themselves besieged abroad and at home. Who or what can save the kingdom before it is too late?

Excellent listen! Narrator was excellent! I’m not a big ‘battle’ person, but the writing and narrative put me right in the middle! Will definitely continue with the series.

I love historical British fiction so this was very well suited to me. I keep reading different versions of the same historical events to get the full perspective. This book has definitely helped me in this effiort.