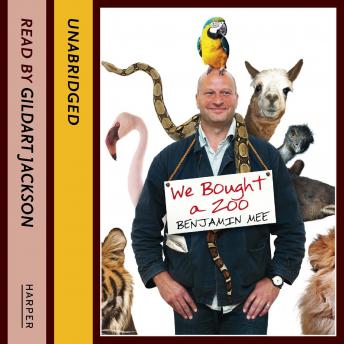 We Bought a Zoo (Film Tie-in)

An amazing true story that has inspired the major Hollywood motion picture this Christmas, to be repackaged for release alongside the film. We Bought a Zoo is about one young family, a broken down zoo, and the wild animals that changed their lives forever. When Ben [played by Damon] and his wife Katherine [played by Johansson] sold their small flat in Primrose Hill, upped sticks with their children and invested their savings into a dilapidated zoo on the edge of Dartmoor, they were prepared for a challenge and a momentous change in all their lives. With over 200 exotic animals to care for - including an African lion, a wolf pack, a Brazilian tapir and a jaguar - Ben's hands, and those of his wife, children and tiny team of keepers, were full.

What they weren't prepared for was Katherine's devastating second brain cancer diagnosis. Ben found himself juggling the daunting responsibilities of managing the park's staff and finances, while holding the bailiffs at bay and caring for his wife.

A moving and entertaining story of courage and a family's attempts to rebuild a zoo, and carry on after Katherine's tragic death.

We Bought a Zoo (Film Tie-in)

This title is due for release on December 8, 2011
We'll send you an email as soon as it is available!