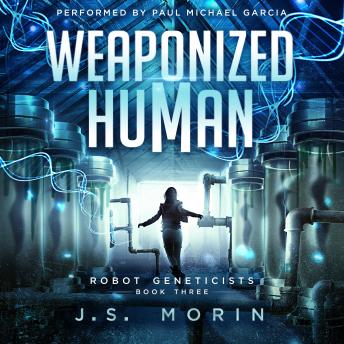 The greatest threat to humanity might be one of their own.

Eve has responsibilities now. As chairwoman of the Human Welfare Committee, she is humanity's voice in a world run by robots. Her job includes approving geneticists who want to engage in ethical human cloning as well as overseeing the agency that hunts down threats to mankind. So when one of her sisters vanishes, Eve can't afford to abandon her post to personally search.

Eve's agents hunt for her missing sister, but in the process, they run afoul of some influential robots. Their brutish, invasive interviews, veiled threats, and hacking threaten to bring down the wrath of more powerful committees, potentially shutting down the entire Human Protection Agency.

With her agents pulled out of the field, Eve faces a crisis. Can she follow the rules of a robotic world, even if it might cost her sister's life?

Weaponized Human is the third book in the Robot Geneticists series. For fans of old-school science fiction where robots are people and any problem can be solved (or created) with enough scientists. If you've ever wondered what the world would be like if scientists who'd read I, Robot created a race of robots, or if you ever wondered what might be more dangerous to clone than dinosaurs, this is the series for you.