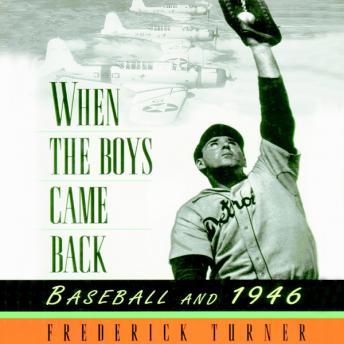 When The Boys Came Back: Baseball and 1946

In the aftermath of World War II, few events in the United States were as eagerly awaited as baseball's spring training. But the national pastime was as unsettled as the rest of the country. Had some of the stars seen their careers ended by their service? How would wartime players fare against returning veterans?
These questions would be answered as the dramatic season unfolded-a season that included Jackie Robinson's signing by the Brooklyn Dodgers, a pennant race in the National League that ended in history's first tie, challenges from a rival Mexican league, and a World Series culminated in the seventh game by Enos Slaughter's legendary dash from first to home. Drawing on new interviews with many of the players who wrote the season's history, Frederick Turner brings this historic chapter in American culture to life.

When The Boys Came Back: Baseball and 1946