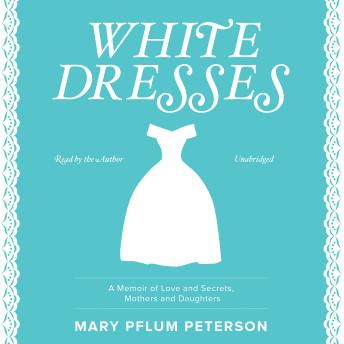 White Dresses: A Memoir of Love and Secrets, Mothers and Daughters

In this riveting, poignant memoir of three generations of women and the white dresses that adorned them, Emmy Award–winning television producer Mary Pflum Peterson recounts a journey through loss, redemption, and her battle to rescue her mother from compulsive hoarding.

As a successful television journalist at Good Morning America, Mary Pflum is known as a polished and highly organized producer. It’s a persona at odds with her tortured childhood, where she watched her emotionally vulnerable mother fill their house with teetering piles of assorted “treasures.” But one thing has always united mother and daughter: their love of white dresses. From the dress worn by Mary’s mother when she became a nun and married Jesus, to the wedding gown she donned years later, to the special nightshirts she gifted Mary after the birth of her children, to graduation dresses and christening gowns, these white dresses embodied hope and new beginnings.

After her mother’s sudden death in 2010, Mary dug deep to understand the events that led to Anne’s unraveling. At twenty-one, Anne entered a convent and committed to a life of prayer and helping others. But lengthy periods of enforced fasting, isolation from her beloved students, and constant humiliation eventually drove her to flee the convent almost a decade later. Hoping to find new purpose as a wife and mother, Anne instead married an abusive, closeted gay man—their eventual divorce another sign of her failure.

Anne retreated into chaos. By the time Mary was ten, their house was cluttered with broken appliances and stacks of unopened mail. Anne promised but failed to clean up for Mary’s high school graduation party, where she was being honored as her school’s valedictorian, causing Anne’s perfectionist daughter’s fear and shame to grow in tandem with the heaps upon heaps of junk. In spite of everything, their bond endured. Through the white dresses, pivotal events in their lives were celebrated—even as Mary tried in vain to save Anne from herself.

Unflinchingly honest, insightful, and compelling, White Dresses is a beautiful, powerful story—and a reminder of the unbreakable bonds between mothers and daughters.

“Peterson’s generous homage to her mother offers an empathetic look at a baffling, frustrating mental illness. A candid, moving memoir about the many complexities of family.”—Kirkus Reviews

White Dresses: A Memoir of Love and Secrets, Mothers and Daughters