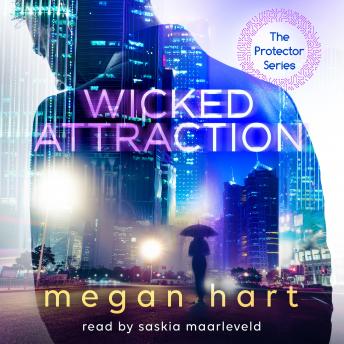 '[Narrator Saskia Maarleveld's] dulcet tones and ability to distinguish each character reflect the heat or pace of a conflict that quickly escalates. With effective pauses that build tension, she eases the listener into a cliff-hanger that will resolve in the final book in the series.' - AudioFile Magazine

Dive into the second audiobook in the fantastic Protector series from New York Times bestselling author Megan Hart! Wicked Attraction is a steamy audiobook that listeners will devour.

A female bodyguard with enhanced abilities. A billionaire playboy committed to destroying people like her. A romance they didn’t expect…

Ewan Donahue has made a lot of mistakes, but making Nina Bronson want to leave him has been the worst. With the initial threats on his life out of the way, he doesn’t really need her protection, but hiring her to take care of him again is the only way to get her back in his life.

When Nina shows up ready to work —and nothing else — Ewan’s determined to win her back. If he can break through the walls his earlier betrayal built, maybe they can have another shot at love. When it turns out that this time, it’s Nina who’s being targeted for danger and possibly death, Ewan’s the one who has to keep her safe.