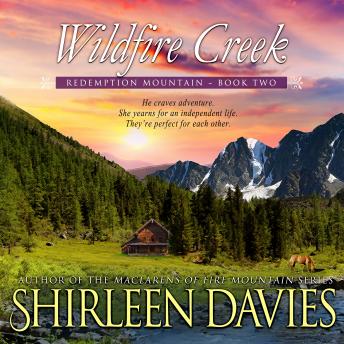 “A heartwarming, passionate story of loss, forgiveness, and redemption set in the untamed frontier during the tumultuous years following the Civil War. Ms. Davies’ engaging and complex characters draw you in from the start, creating an exciting introduction to this new historical western romance series.”

Luke Pelletier issettling into his new life as a rancher and occasional Pinkerton Agent, leaving his past as an ex-Confederate major and Texas Ranger far behind. He wants nothing more than to work the ranch, charm the ladies, and live a life of carefree bachelorhood.

Ginny Sorensen has accepted her responsibility as the sole provider for herself and young sister. The desire to continue their journey to Oregon is crushed when the need for food and shelter keeps them in the growing frontier town of Splendor, Montana, forcing Ginny to accept work as a server in the local saloon.

Luke has never met a woman as lovely and unspoiled as Ginny. He longs to know her, yet fears his wild ways and unsettled nature aren’t what

she deserves. She’s a girl you marry, but that is nowhere in Luke’s plans.

Complicating their tenuous friendship, a twist in circumstances forces Ginny closer to the man she most wants to avoid—the man who can destroy her dreams, and who’s captured her heart.

Believing his bachelor status firm, Luke moves from danger to adventure, never dreaming each step he takes brings him closer to his true destiny and a life much different from what he imagines.

Wildfire Creek, book two in the Redemption Mountain Historical Western Romance series, is a full-length novel with an HEA and no cliffhanger.