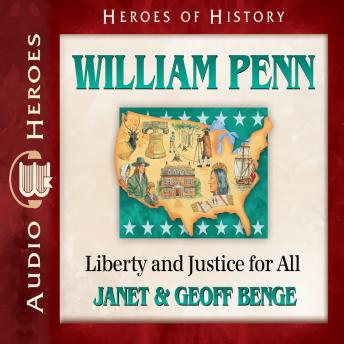 Wiliam Penn: Liberty and Justice for All

With the favor William's father enjoyed in Britain's royal court, all William had to do was show himself to be a faithful royalist, and wealth and privilege would be his. Instead he chose to follow his conscience--to expulsion from university, disinheritance, imprisonment, and the threat of death.

In a world where freedoms were subject to the whims of rulers, William Penn worked passionately for religious tolerance. When this Quaker reformer secured a land grant in America, he laid for Pennsylvania a foundation of liberty, justice, fairness, and tolerance that would later guide the drafting of the Constitution of the United States (1644-1718).

Heroes of History is a unique biography series that brings the shaping of history to life with the remarkable true stories of fascinating men and women who changed the course of history.

The stories of Heroes of History are told in an engaging narrative format, where related history, geography, government, and science topics come to life and make a lasting impression. This is a premier biography line for the entire family.

Wiliam Penn: Liberty and Justice for All