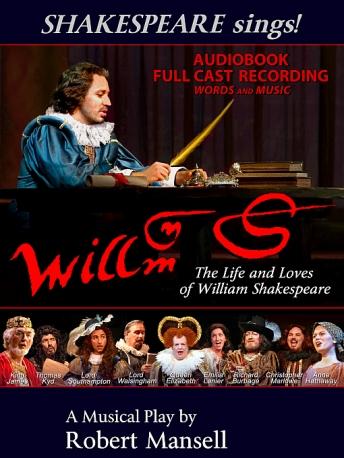 Willm-S: The Life and Loves of William Shakespeare

SHAKESPEARE sings! A Musical Play about the Life and Loves of William Shakespeare.

Shakespeare's intriguing life and death is highlighted by his scandalous love for a 'dark lady' and a 'man right fair'. The listener is transported back to Elizabethan England where the musical is centered on London's colourful world of street markets, taverns and the royal palaces of Queen Elizabeth 1st and King James 1st; with a dramatic climax at the fiery destruction of Shakespeare's beloved Globe Theatre.

Mansell's sparkling songs, romantic music, and clever dialogue (incorporating actual phrases from Shakespeare's works), brings refreshing life to the Bard's story. This musical audiobook is an ideal addition to the catalogues of all libraries, universities and schools, as well as to theatre-lovers and fans of Shakespeare's sonnets everywhere.

'Act 1 Fanfare'
Introduction
'To Be or Not To Be'
Stratford 1586
'Brave New World'
'London's a Great and Glorious City'
London 1586
'All the World's a Stage'
The Palace 1590
'Men, Men, Men!'
The Palace 1590 continued
'Tomorrow and Tomorrow and Tomorrow'
The Palace Terrace 1590
'If Music Be the Food of Love'
The Tower of London 1593
Deptford Strand 1593
'A Dark Lady'
Mistress Bull's Tavern 1593
'Women and Wine'
Marlowe's Murder (Brawl and 'Globe' construction)
The Globe Theatre 1601
'The Power to Write'
The Globe Theatre 1601 continued
'Two Loves Quartet'
Westminster Abbey 1603 (Funeral)
'Brevity is the Soul of Wit'
Westminster Abbey 1603 continued
'The King's Men'
'Fame and Fortune' (Coronation)

Willm-S: The Life and Loves of William Shakespeare