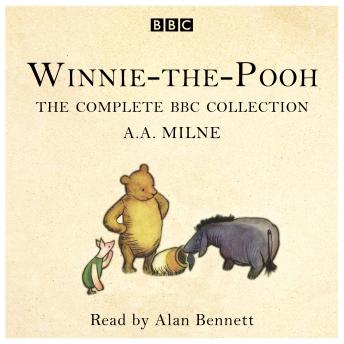 Alan Bennett reads A.A. Milne's much-loved stories about a small bear and his friends. The collection includes; Winnie the Pooh, The House at Pooh Corner and A Party for Pooh.

What is the connection between a bear of very little brain and a honey pot? Usually it's the very sticky paw of Winnie the Pooh, as he takes a break between adventures for a little something. In these stories, taken from the book 'Winnie-the-Pooh', Pooh goes visiting and gets into a tight place, Eeyore loses a tail, Piglet meets a Heffalump, Eeyore has a birthday and gets two presents, and an expedition is mounted to the North Pole! As usual they are accompanied by Kanga, Roo, Rabbit and Owl - to say nothing of Pooh's very clever young human friend, Christopher Robin. Now with a musical introduction, Alan Bennett gives A.A. Milne's characters the voices you felt they were always meant to have in this collection of stories about Winnie the Pooh, Piglet, Tigger, Eeyore and Owl.

The stories are:
Winnie-the-Pooh Goes Visiting and Gets into a Tight Place
Pooh and Piglet Nearly Catch a Woozle and Eeyore Loses a Tail
Piglet Meets a Heffalump
Eeyore has a birthday and Gets Two Presents
Christopher Robin Leads an Exposition to the North Pole
A House is Built at Pooh Corner for Eeyore
Tigger Comes to the Forest and has Breakfast
A Search is Organdized and Piglet Nearly Meets the Heffalump Again
Pooh Invents a New Game and Eeyore Joins In
Piglet Does a Very Grand Thing and Owl Moves House
Kanga and Baby Roo Come to the Forest
Piglet is Entirely Surrounded by Water
Christoper Robin Gives Pooh a Party
Tiggers Don't Climb Trees
Rabbit has a Busy Day
Tigger is Unbounced