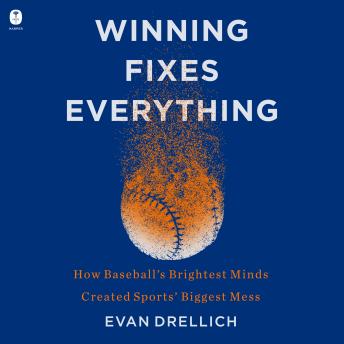 Winning Fixes Everything: The Rise and Fall of the Houston Astros

The reporter who broke the Houston Astros' cheating scandal offers an in-depth exploration of the team and Major League Baseball to uncover how a heralded organization could become so dishonest.

As Moneyball-thinking and Ivy League graduates took over Major League Baseball, one franchise set out to create a new blueprint, to build a cost-efficient winning machine on the principles of the outside business world.

In less than a decade, the Houston Astros both revolutionized the game and created a culture that led to one of the worst cheating scandals in baseball history, a Shakespearean tragedy of innovation and change management. Through years of extensive interviews, former Astros beat writer Evan Drellich delivers the definitive account of baseball’s most controversial franchise, an in-depth dissection of the way a modern baseball team truly works, from ownership down to the clubhouse—without the usual myth spinning.

Drellich shows the rise and fall of the Astros to be a collision of subcultures. The team’s top boss was a former McKinsey consultant who lived on the bleeding edge with no guardrails. Baseball players themselves have long sought every possible advantage, but baseball’s commissioner seemed to forget that fact, despite his experience with the sport's infamous performance-enhancing drug scandals.

All of it came at a cost to fans, employees and the sport on a whole. But as Winning Fixes Everything makes clear, “The Astros Way” isn’t going anywhere. Drellich uses the saga of the Astros’ scandal to detail the evolution of baseball itself, and the way business is conducted inside the game today.

Winning Fixes Everything: The Rise and Fall of the Houston Astros

This title is due for release on March 29, 2022
We'll send you an email as soon as it is available!