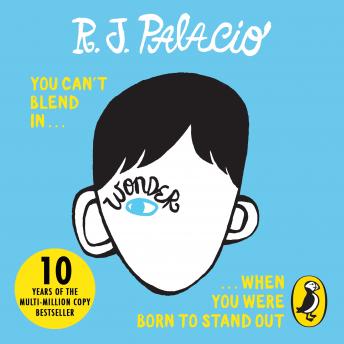 'My name is August. I won't describe what I look like. Whatever you're thinking, it's probably worse.'

Auggie wants to be an ordinary ten-year-old. He does ordinary things - eating ice cream, playing on his Xbox. He feels ordinary - inside. But ordinary kids don't make other ordinary kids run away screaming in playgrounds. Ordinary kids aren't stared at wherever they go.

Born with a terrible facial abnormality, Auggie has been home-schooled by his parents his whole life. Now, for the first time, he's being sent to a real school. All he wants is to be accepted - but can he convince his new classmates that he's just like them, underneath it all?

Great book great author wish there are more books like this one.

It a good book for kids

I definitely enjoyed this book. I’m told it’s supposed to be for year 8 students, but I honestly think it’s suited a little younger. Good narration in regard to the different voices for parts of the book from different character perspectives. Good morals and themes for kids.

You're never to old to learn. I will try best to be braver.