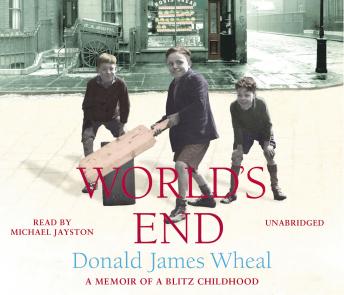 Best-selling author Donald James grew up in World's End, Chelsea during the Blitz years. Just on the edge of a fashionable middle class world, his childhood experience was in stark contrast to the privileged, bourgeois lifestyle glimpsed a few hundred yards away. He grew up in stark poverty and depredation, a hard existence yet shot through by the humour and courage of his family and neighbours. This was a now vanished world of grimy factories and generating plants, coal drays, flat caps and boozers, betting shops, dog tracks, 'Piccadilly girls', Guinness Trust buildings and bare foot children. World's End was a melting pot of the working class labourers who flooded to London in the previous century to make their fortunes, and Donald's family was no exception. The story tells of the feud between Donald's two grandmothers that meant that though they only lived a few yards away from each other, for a dozen years they never acknowledge one another avoiding even at Donald's parent's weeding, Christmases or birthday celebrations. Yet, though it was hard, Donald's was a happy childhood until the war came. Donald was eight. The radio carried news of impending war and then the declaration of war, difficult to believe in the Indian summer of the 1939. But soon Donald's world would be torn apart by school drills with gas masks and evacuation plans, evacuation itself then an uneasy return to London just as the Blitz itself began and the nights were spent in terror as bombs rained down through the Black Out. Then came the night that Donald's world, did literally end and with it his childhood.