You Are Not Alone: Michael, Through a Brother’s Eyes 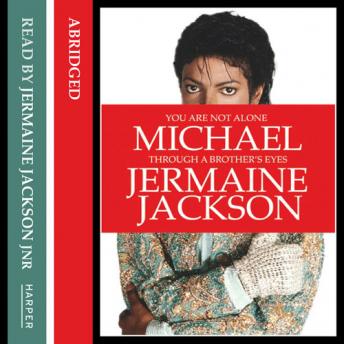 ‘This is the truth as we know it. I have read so much about what people think they know about Michael, but this is about what really happened.’ Jermaine Jackson


You Are Not Alone is an intimate, loving portrait of Michael Jackson, illuminating the private man like never before. It is an invitation into Michael’s real character, private insights and hidden feelings: the innermost thoughts of a fiercely private individual.


Jermaine Jackson knew Michael like only a brother can. In You Are Not Alone Jermaine brings light to the man behind the mask of superstardom, an identity that has lingered in the shadows for too long. You Are Not Alone is a celebration of the real Michael: the boy who shared a tiny bunkbed with Jermaine at 2300 Jackson Street, Gary, Indiana; the brother with whom Jermaine shared laughter, tears and memories; the boy who would grow up to become a legend.


Raw, honest and incredibly moving, You Are Not Alone is also a sophisticated, no-holds-barred examination of Michael Jackson, aimed at fostering a true and final understanding of who he was and what shaped him. This is Michael Jackson – the man, not the legend – through a brother’s eyes.


If you love Michael Jackson, this is the only book you will want to read.


If you think you know the Michael Jackson story, it’s time to think again.

You Are Not Alone: Michael, Through a Brother’s Eyes